A modified version of Gleam as requested by Staffan Enboom <cybe at iki dot fi> with smaller titlebar and simple borders. The custom resize button has also been removed because it didn't make sense with the tiny 2 pixel borders.

The original version of Gleam was released by me in June, 2000 and has found its way into some default Gnome distributions with Sawfish. I really wasn't aware that anyone was still using it!

I've included a bunch of extra button images so you can feel free to change them around, or add custom buttons of your own (instead of the close/min/shade ones I have on by default). To make more buttons, start with "blank.png" and then draw on top of it. Then change the brightness and contrast accordingly: For the clicked version: brightness -100, contrast -50. For the off version: brightness +100, contrast -50. Just to keep them consistent with what I've provided.

Cheers, I hope you enjoy it. Comments are welcome. 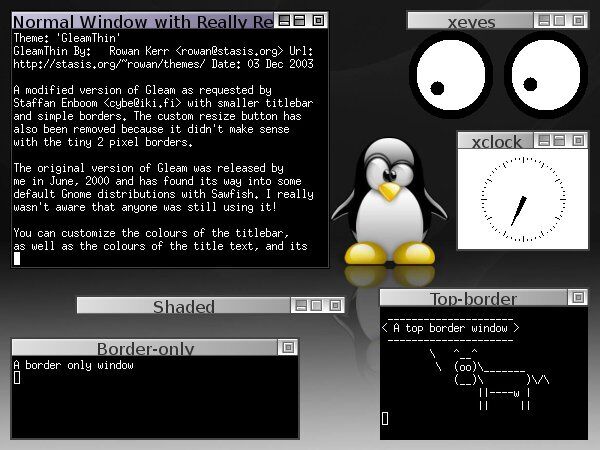 Retrieved from "https://sawfish.fandom.com/wiki/GleamThin?oldid=6304"
Community content is available under CC-BY-SA unless otherwise noted.