Water In Latin is a Sawfish theme somewhat influenced by the window border look of a well known non-Wintel operating system, but isn't in any way compatible with it. All graphics and all the theme code are original (in the sense that they're made from scratch) and free to use and redistribute.

This works reasonably well as it is, and is quite fast because of not too many pixmaps used. In fact, only the title bar uses them; the borders are drawn with just colors.

I'd like to add some special functionality, like eg. a free memory indicator and a processor usage monitor in the title bar. Personally I can't write a single line of lisp, but I assume this is not impossible. Also, I need to find a way to make the inactive window title text gray instead of black. The possibility for the user to customize the button configuration would also rock very hard. So if you know lisp, mail me or leave a comment at the homepage of the theme at sawfish.themes.org and we'll see if this bastard son of the proprietary fruit company design can be improved in some small way. :-)

(Currently the theme also includes a variation with an alternative button configuration, ie. the top right corner button kills the window instead of maximizing it.) 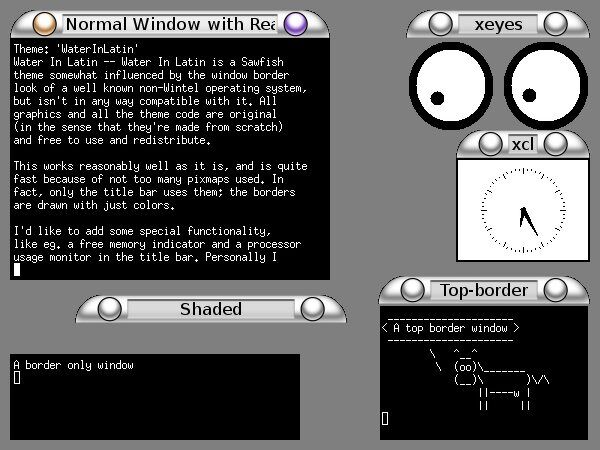 Retrieved from "https://sawfish.fandom.com/wiki/WaterInLatin?oldid=6520"
Community content is available under CC-BY-SA unless otherwise noted.